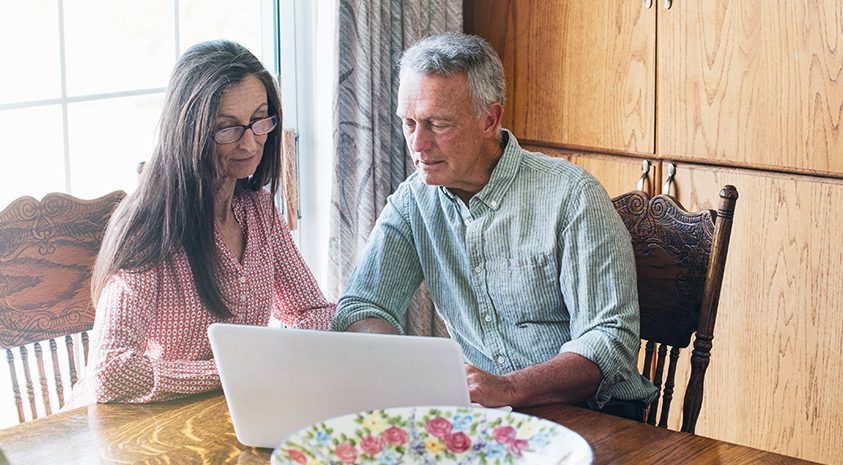 Social Security was set up to help provide some financial security to America’s aging population as workers retire. But there are lots of misconceptions about Social Security. When people believe these myths, their financial security is actually threatened rather than helped! Take a look at some of these common myths, and learn the facts so you can help share the right information when talking retirement with your friends and family.

Lots of people believe this, probably because politicians often use this position to stir up support for their side’s solution. Because of this, this myth is a tough one to unravel. It helps to start by understanding where Social Security comes from.

It’s a pay-as-you-go system, meaning revenue coming in from Federal Insurance Contributions Act (FICA) payroll taxes cover the benefits going out. So as you pay into the system, that money goes out immediately to pay for older adults already collecting. When you are ready to collect, younger workers will be paying into the system to fund your benefits.

Now here’s where the political opinions come in. For years, this pay-as-you-go system was putting in more money than was going out. This could happen for a lot of reasons. For example, when the Baby Boomers reached working age, lots of jobs (and new employees) meant lots of money going in, while slightly lower health costs and shorter life spans meant less was coming out. This excess built up a Social Security trust fund, which has helped cover the years when less money came in than went out. The issue is that with Boomers now drawing Social Security, more is going out than coming in, so the trust fund is now being tapped and draining quickly.

It’s estimated that the trust fund will run out by 2035. But remember, this is still a pay-as-you-go system. It’s just that projections show FICA revenues may only provide three quarters of what’s needed to pay full benefits. So, this means one of two things will most likely happen: Either Social Security will reduce their benefits (frustrating, but not bankruptcy), or taxes will increase to cover the amount, and bring more money in.

While it seems like an imbalance, the truth is it’s simply a back and forth of paying into a system. In 1983, the program nearly depleted its reserves, leading to an overhaul by Congress. Back then, they raised the full retirement age and increased the payroll tax rate. They also added an income tax on benefits. It’s been done before so, adjustments will most likely happen to keep the system working well.

FICA taxes include Social Security, as well as a Medicare tax. Like all payroll taxes, every working adult in America pays these, and they are not voluntary.

So, where does this myth come from? Well, when the Social Security program first started, not every job was covered by Social Security. Some people worked jobs that didn’t require them to pay into the program. Of course, that also meant they weren’t able to collect benefits.1

Now that almost every job is covered, Social Security is not voluntary. You participate in the program through your payroll taxes at your job.

The belief that illegal immigrants come to American and collect Social Security benefits is not true. While you technically don’t have to be a citizen of the United States to collect benefits, you do have to live here and pay into the system for at least 10 years, which is the same requirement of everyone who collects Social Security.

The government doesn’t keep your Social Security contributions in a personal account for you, and they don’t earn interest. Remember, because it is a pay-as-you-go system, your benefit is based on how much money you earned over your working life, not how much you contributed. Because of this, it’s meant to be a supplemental income.

It’s best to not think of Social Security as saving for retirement, and more as an earned benefit from working. There are lots of other ways to save for retirement and they should be part of your financial planning. You can reach out to a Bankers Life financial advisor to talk more about your goals, and how to reach them by putting a proper retirement plan in place.

As of this publishing, the current full retirement age when you are eligible for 100% of your benefits is 66. Over the next 5 years, the age will increase by two months at a time, ultimately settling at 67 for those born in 1960 and after.

So where does this come from? Well when the program was started in 1935, the age was 65. Later, that was lowered to 62 to receive a partial benefit. In 1983, the age was raised to help reduce costs. The age shifts from time to time to help keep the system in check (see Myth 1).

It is true that you can start taking Social Security benefits as early as 62. If you do this, however, your benefits will be reduced—the amount you receive each month will be lower than if you wait. This means taking benefits early isn’t necessarily “better”.

That said, you could hold off until 70 to take benefits later and receive extra in your monthly check—132% of your benefit. This strategy may be right for your situation, but each person’s individual goals are always unique. It’s best to talk to a financial advisor to help you understand your current retirement goals, your savings, and what to expect from Social Security. They’ll be able to show you the difference in claiming benefits earlier vs later.

This was actually true until 1984, but there was an overhaul signed by President Reagan that allowed taxing of a certain portion of your Social Security income, depending on how much you earned.

The AARP put together this breakdown: “You will pay federal income tax on up to 50 percent of your benefits if your income for the year is $25,000 to $34,000 for an individual filer and $32,000 to $44,000 for a couple filing jointly. Above those thresholds, up to 85 percent of benefits are taxable. Below them, you don’t owe the IRS anything on your benefits.”

When it comes to state taxes, each state is a little different so you may or may not owe state taxes on your Social Security. You can contact your individual state’s tax agency to learn more about your state’s tax laws.

The Company and its producers do not provide legal or tax advice. Each individual should seek specific advice from their own tax or legal advisors. The general and educational information presented in this material is a sales and marketing piece for insurance products offered by Bankers Life and Casualty Company.